Q: I have several recipes that use garam masala but I can’t find this in Knysna. Is masala the same thing? And what is the difference between curry powder and masala? – Heather Fraser

A: Masala is a mixture of spices that forms the foundation of Indian cookery. The word is said to have come from the Arabic word for seasonings.

This blend of spices is the very essence of the food and there are many different types and combinations of masalas.

They can be ground or whole spices and a masala can be dry or wet.

The best known masala is a northern Indian blend of dry spices pounded to a powder – this is known as garam masala.

Garam is a Hindi word meaning hot, so it is a combination of the warm spices.

Garam masala is mostly used with meat and some chicken and rice dishes. It is rarely used in fish or vegetable curries as it is considered too strong.

Curry powder was created by the British in India to provide a ready-made version of a spice mixture used in south India. The blend includes coriander, cumin, mustard seed, pepper, fenugreek and turmeric, with the addition of cinnamon, cloves and cardamom, which are roasted and ground to a powder.

Like masala, the blend can vary. Commercial curry powders became available to cooks in Britain from the late 18th century. A curry made using a curry powder would be considered an Anglicised version of the Indian original.

Below is a recipe to make your own garam masala. It’s really easy but essential to use fresh spices. It’s best made just before required but you could make up a quantity and store it in the refrigerator.

Using a non-stick frying pan, toast all the ingredients except the dry ginger until the mixture becomes aromatic. Stir occasionally and take care not to let it burn.

Add the dry ginger and allow to cool.

Remove the cardamom seeds from their skins and return the seeds to the roasted spices mixture.

Grind together in a spice grinder or coffee grinder and store in an airtight container.

Q: I am having great difficulty finding decent rotis in the Bellville area lately, so I decided to try my hand at making my own. Imagine my embarrassment when I discovered they are only made of flour and water. My first two attempts have been unsuccessful – the first time I used self-raising flour and when I folded it, it cracked. I then tried white bread flour but still no success. Can you help me with the correct flour and cooking instructions? – Sally Weir

A: For advice, I turned to expert Asha Maharaj, who has a weekly food column in the Sunday Times Extra. She has the touch when it comes to making roti, which, she tells me, comes from years of making it. Maharaj makes a really good flaky roti, which requires the addition of baking powder, sugar and ghee.

I think the ghee is what gives the dough more flexibility for a novice. The idea is to make perfect circles – which, I’m told, takes years to perfect. Maharaj recommends you use a side plate as a guide.

Sift the dry ingredients into a large mixing bowl. Rub in the ghee. Add water and make a soft dough. Knead well. Divide the dough into 12-15 equal segments depending on the thickness of the roti required, although 12 will give a flakier roti.

Mould into balls, dust with flour. Roll out to the size of a side plate. Brush lightly with melted ghee, sprinkle flour over and fold to make a square. Roll into a roti 20cm x 20cm. Heat a griddle to moderate and toast the roti on both sides. Smear with ghee liberally as it puffs up and browns lightly. Remove onto a lined dish. Serve hot with your favourite curry. 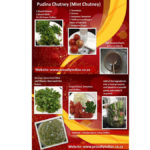 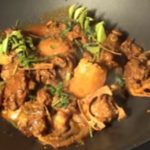 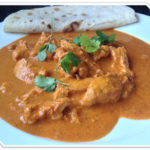 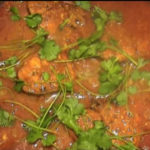 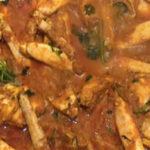